The most recent alien sighting in the world just happened on January 17, 2017, in Penvmpakan, China. Aliens are no strangers to China, and this dual UFO sighting definitely gathered a crowd. 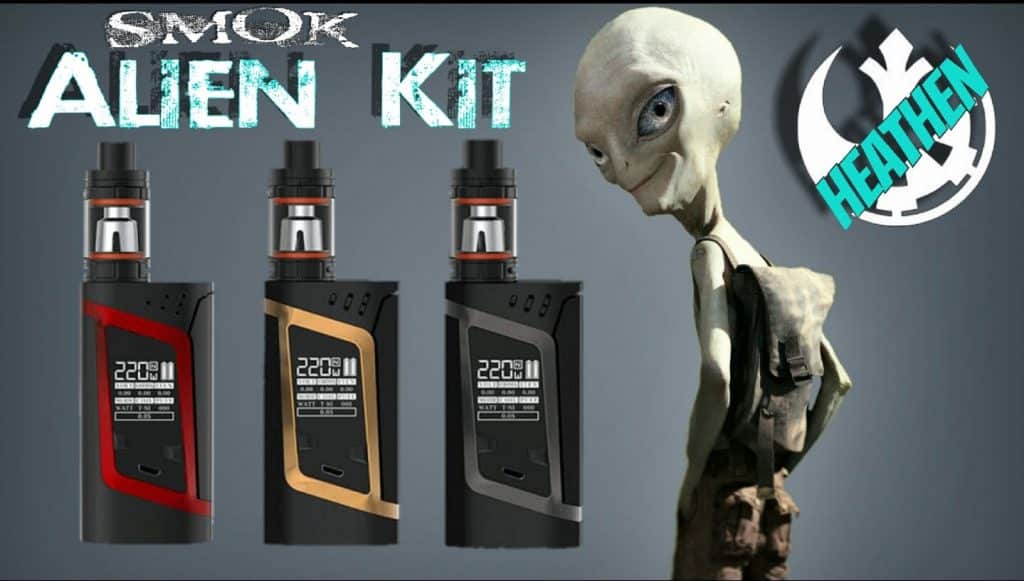 So what do our cosmic brothers and sisters look like? Now, if you’re more pragmatic about your aliens, you’ll probably like the science-backed alien documentary from National Geographic that promises to use astronomy, astrobiology, evolution, and physics to answer that question based on five different likely inhabitable spaces in the universe. “It’s an expedition of astronomical proportions!”

So much universe and the only alien we’ve ever come across is the Smok Alien, which isn’t so alien to us these days. They’ve made some tasty little upgrades to one of our all-time favorite kits but since we started carrying the Alien, we’ve become very familiar with its extraordinary qualities. This tiny wonder reaches a maximum power of up to 220W and the baby tank will bestow you with massive clouds of vapor.

We could imagine pulling some decent clouds while watching Alien Faces and zenning out on an intergalactic safari of aliens who are less like the ones from Hollywood and more like they would actually appear in their native environment. Since we have the Smok Alien Kit on sale right now ($129) with 2 LG HG2 Batteries and a free $20 30ml ejuice, we thought we’d give you our top 3 picks for otherworldly ejuice flavors.

Kanzi is a primate who curates only the best candy flavours—strawberries, watermelon and a hint of kiwi that will remind any 90s kid of tooth-melting Fruit Roll-Ups.

#2: Bloody Goo by One Last Drop

Bloody Good just sounds like alien blood, so stick it in your Smok Alien and toke up. Your palate will be hit with crisp citrus, sweet and tangy blood orange, and a hit of warm raspberry drizzled over pannacotta.

There is a star that is bigger than Earth out there and it’s named Lucy, after the Beatles song “Lucy in the Sky with Diamond”. Plus, this star is an actual diamond that weighs 10 billion-trillion-trillion-carats. We swear!

Innovation is what keeps the exploration for alien life alive (the truth is out there), and what keeps the Smok Alien changing the vaping experience tamiflu dosage for adults. For one thing, the unit now The Alien 220W now accepts two 18650 batteries, which install through the bottom battery panel. It didn’t always do that but the evolution allows us to take our Aliens out for a night or along on a hike and we don’t need to bring a spare battery or charging port.

Get the Smok Alien Kit, plus 2 LG HG2 18650 Batteries, and a $20 30ml juice from Big Cloud Vapor Bar of Burnaby BC for just $129. We also have the latest collection of starter kits and other mods at our shop.